The recent © Murakami show has provoked mixed feelings. Some of my cultured friends have dismissed it as gauche, but I’ve never seen the Brooklyn Museum more crowded. Though the exhibit was of mixed quality, I think contemporary art’s general eagerness to break down barriers between aesthetics, commerce, and politics has real emancipatory potential. I’ll try to argue the point while bearing in mind Demand’s warning that “Texts on art rarely explain what they profess to explain; they simply simulate the explainability of their theories.”

According to the Brooklyn Museum,

The exhibition © MURAKAMI explores the self-reflexive nature of Murakami’s oeuvre by focusing on earlier work produced between 1992 and 2000 in which the artist attempts to explore his own reality through an investigation of branding and identity, as well as through self-portraiture created since 2000.

Jed Perl of The New Republic laments the show as one more instance of OBD (obsessive branding disorder), and sees Murakami’s superflat style as substancelessness:

You cannot possibly understand what a safe haven for frauds and con artists the art world has become until you have walked into this trickster’s trap. Murakami, who produces figurines that are sold inexpensively in Japan, as well as very expensive Louis Vuitton handbags and exceedingly expensive paintings and sculptures, is a canny observer of consumer desires. It is easy to appreciate how niftily some of his effects are engineered. . . . His compositions with lots of eyeballs have a freaky dynamism; and his melting and transmogrifying sci-fi humanoids, which mingle Surrealist strategies with a psychedelic Peter Max sensibility, are sporadically diverting. But the work is all shell, all facade, all empty assertion. . . .To the extent that Koons or Murakami can be said to have a style, it is a frozen style, an inert vocabulary.

But is it Murakami’s style that’s the problem, or its lack of reference? At the Brooklyn Museum show, the artist’s private mythology and dilemmas motivated most of the recent work. Listening to the cell-phone messages accompanying several works, I was struck by how often he would bring up his own pedestrian business challenges or moods as direct inspiration for grandiose visions. His exhibit at the Japan Society three years ago consistently referenced the traumas of Hiroshima and Nagasaki, lending much of that work a gravitas and legibility lacking at the Brooklyn show.

Murakami’s current work often feels weightless and unmoored, a natural consequence of his failure to emphasize the dark side of an increasingly marketized society. Some may dismiss that theme as excessively didactic or depressing, but they should take a look at Kenneth Tin-Kin Hung (whose video art appeared at another exhibit (Unmonumental) which Perl criticized). Hung’s Because Washington is Hollywood for Ugly People (still below) is frenetic, Rabelaisian, and profane–but strikes me as something (sans annoying soundtrack) that will be essential to those trying to understand contemporary culture and politics decades hence. As Roberta Smith notes, this “brashly beautiful, furious work” is a “hilarious, scarifying portrayal of the nation’s leadership and its machinations around the war in Iraq.” 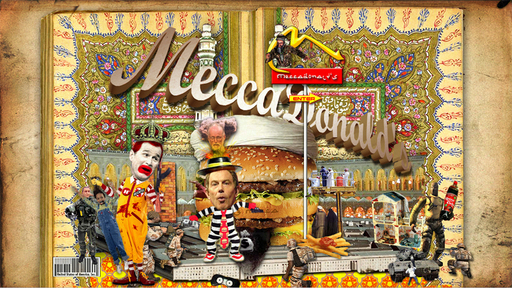 (Hung, still from Because Washington is Hollywood for Ugly People)

(Admittedly, another NYT reviewer said that Hung’s work recalled a “fever dream of a political blogger,” and a video chock full with references to Mitt Romney, John Edwards (dressed as Tinker Bell), Karl “Turd Blossom” Rove, et al., might seem instantly dated. But we gladly excavate the intricate symbolism of a Bosch, and Hung’s garden of political delights offers lasting insights on how political campaigns spiralled into an inferno of potshots and adspots. The work’s narrative and humor may disguise its craft–but let’s remember that’s the same plaint many critics had against the metaphysical poets.)

On a more inspiring note, Hung’s art/game Gas Zappers makes the fight against global warming seem fun while frankly and frivolously depicting the power and motives of those who stand in its way. Has any artist better reflected Stephen Duncombe’s ideas about the fantastic dimensions of politics?

Seizing upon references high and low, Duncombe makes the case that spectacle can be an ethical and sophisticated means of appealing to, even seducing, the American public. Rather than bemoan the fact that people are obsessed with Paris Hilton and condemn video games like Grand Theft Auto: San Andreas, both of which Duncombe discusses with a mix of awe and critical glee, liberals need to determine why that obsession existsâ€”pop culture as road map into the American mind.

Therefore it’s dangerous for any conscientious fan of contemporary art to ape Perl’s disdain for the logos, flatness, and game-like quality of an ever-more commercial world. To put it bluntly: corporate artifacts like Louis Vuitton bags and Grand Theft Auto are the Madonna (& Child) of the Future. These tropes will be endlessly celebrated, mocked, and otherwise referred to. The question is whether the leading artists doing so are preoccupied with the semiotics of Hello Kitty or blog about low-cost solar panels.

By and large, I am in agreement with Perl’s skepticism about Murakami. With him,

I do not really believe that the educated audience that surveys the work of . . . Murakami at the Brooklyn Museum[] sees some deep meaning in these overblown comic-book heroes and factory-produced baubles. A lot of the visitors . . . have a knowing, ironic look fixed on their faces. They can see that what is presented as art with a universalist message is really just global marketing swill. . . .

The question, then, is how to react to a world where marketing, once a tool, has become a climate of opinion. Perl retreats to “art that pursues its own viewpoint,” and commends efforts of the Chinati Foundation and the (original) Barnes Foundation to situate artworks in particular places, for particular audiences, who must make real effort to be physically and mentally present. I’m sure Perl’s leisure and education make such experiences particularly meaningful for him. But I’ve made the pilgrimage to Merion, PA, and I cannot share his sadness at the Barnes Collection’s upcoming move to downtown Philadelphia. We live in a culture of speed, distraction, and pressure. Art can either adapt to that or face the fate of academic poetry, which, while “still mattering,” faces dwindling audiences and relevance.

Hung knows how to make the “road more traveled” fresh and alluring. Though the establishment may bridle at an artist who blogs on cheap food and renewable energy, maybe they should question their own presumptions about the autonomy of the aesthetic sphere. As a new Adorno might say, after Abu Ghraib, apolitical art is suspect.