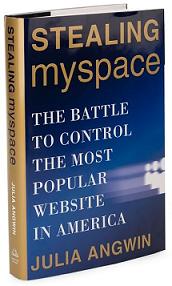 As some of you know, John Scalzi is a good friend of mine. His Big Idea series inspired the Bright Ideas series over at Concurring Opinions (John was gracious enough to let me ping off his series). John’s series usually focuses on science fiction, but a recent post highlighted Julia Angwin‘s new book, Stealing MySpace: The Battle to Control the Most Popular Website in America. As John notes, Julia is the Senior Technoloy Editor of WSJ.com, the Wall Street Journal’s web site.

Julia’s impressive experience makes her well positioned to offer insights about MySpace. She has covered technology for the San Francisco Chronicle in 1996 “including Microsoft’s antitrust woes”; was named “Outstanding Young Journalist of the Year” by the Northern California chapter of the Society of Professional Journalists; and won a Knight-Bagehot fellowship in journalism for studies at Columbia Business School. She obtained an MBA at Columbia in 2000 and then started her career with The Wall Street Journal in New York. As her bio explains she “cover[ed] technology and the dot-com boom from an East Coast perspective. The rise and fall of the AOL Time Warner merger was an important part of [her] beat. In 2003, [she] was on a team of reporters at The Wall Street Journal that was awarded the Pulitzer Prize in Explanatory Reporting for coverage of corporate corruption.”

I liked the post and luckily Julia and John said they did not mind me reposting the entire post. So here’s Julia.

As a nonfiction writer, I don’t get to choose the “big idea” in my work. All the ideas – large and small – arise naturally from the facts I uncover. My job is to take the facts, stare at them hard and extract the ideas from them.

When I began writing Stealing MySpace, I thought that the “big idea” that would emerge would be about the remix generation – the kids who were using MySpace to reshape their digital worlds. After all, weren’t they changing the world with their behavior?

But, in fact, the big idea that arose from my reporting was altogether different. It was this: what does it take to be a successful entrepreneur?

Early in my investigation, I discovered that the founders of MySpace were scammers. Before they started the social-networking site, they sent spam, distributed spyware, and peddled spy cameras you could hide in your shoe and e-books touting “how to grow taller” and “how to hypnotize people.” MySpace was just an idea they copied from a popular Web site at the time, Friendster.

MySpace’s parent company, Intermix, wasn’t much better. It made most of its money selling subscription wrinkle cream and diet pills online, had a spyware business of its own, and had a thriving animated greeting card business best known for its fart and poopy diaper jokes.

In the book, the venture capitalist who backed Intermix (and was initially reluctant to support MySpace) David Carlick says why he’s not worried about the unsavory parts of Intermix. “Marketing has always been on the scary edge of ethical.”

This was a vastly different story than the canonical tech startup tale. This oft-told narrative stars a Bill Gates genius-type founder dropping out of Harvard to work on his technological breakthrough in a garage somewhere.

This was the story that I absorbed into my pores as a kid growing up in Silicon Valley, and then as a reporter covering the industry.

Meeting this new type of success story I wondered: were the MySpace founders just lucky? Or was their hucksterism part of what it takes to succeed?

One solution presented itself to me: Web technology had finally become easy to use. No longer were Web companies going to be run by engineers; now they could be run by marketers, too.

But then, slowly, it dawned on me that the Silicon Valley tale I’d grown up on was a bit of a myth. Hadn’t these tech companies really been run by marketers all along? Bill Gates, although he was a brilliant programmer, was an even more brilliant marketer. Ditto for Steve Jobs, whose marketing prowess is such that he is considered a “reality distortion field.”

And thus I stumbled onto my big idea: The greatest entrepreneurs are hucksters who have simply crossed the line into brilliance.