“Heâ€™s not only been used by politicians like the Venezuelan president, Hugo ChÃ¡vez, to promote their own agendas, but heâ€™s also been employed by merchants to sell air fresheners in Peru, snowboards in Switzerland and wine in Italy.”

He is Che Guevera, and this NYT book review further notes:

…The supermodel Gisele BÃ¼ndchen pranced [ed: “Pranced?” Blarg…] down a runway in a Che bikini. A menâ€™s wear company brought out a Che action figure, complete with fatigues, a beret, a gun and a cigar. And an Australian company produced a â€œcherry Guevaraâ€ ice cream line, describing the eating experience like this: â€œThe revolutionary struggle of the cherries was squashed as they were trapped between two layers of chocolate. May their memory live on in your mouth!â€

This in the context of a book review by Michiko Kakutani, who writes:

…As Michael Casey, the Buenos Aires bureau chief for Dow Jones Newswires, observes in his fascinating new book, â€œCheâ€™s Afterlife,â€ the image of Ernesto Guevara most frequently used by politicians, demonstrators and merchants alike is based on the famous 1960 picture of the guerrilla leader taken by the Cuban photographer Alberto DÃ­az GutiÃ©rrez, known as Korda. Itâ€™s the familiar, ubiquitous close-up, often rendered in high-contrast blacks and whites, which features the handsome 31-year-old Argentine-born revolutionary looking off into the distance as if he had his eyes on the future, his gaze â€” described, variously, as pensive, determined, defiant, meditative or implacable â€” as difficult, in Mr. Caseyâ€™s words, â€œto put a finger onâ€ as the Mona Lisaâ€™s smile.

In this bracing and keenly observed book, Mr. Casey traces how Kordaâ€™s photograph became one of the most widely disseminated images in the world, how Che went from being a symbol of resistance to the capitalist system to one of the most marketable and marketed brands around the globe, how the guerrilla fighter became a logo as recognizable as the Nike swoosh or McDonaldâ€™s golden arches. … 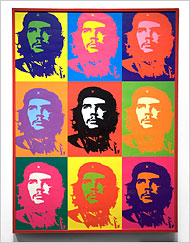