“Enter your name, and Personas scours the web for information and attempts to characterize the person – to fit them to a predetermined set of categories that an algorithmic process created from a massive corpus of data. The computational process is visualized with each stage of the analysis, finally resulting in the presentation of a seemingly authoritative personal profile.” 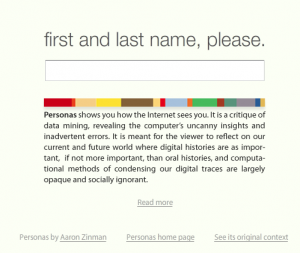 I like that: “finally resulting in the presentation of a seemingly authoritative personal profile.”

I think the focus is on “seemingly”. The next image is from my personal personas run (while it was under way): 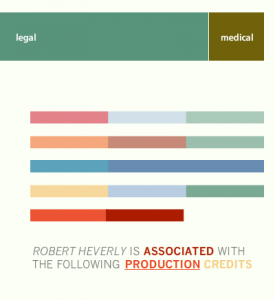 Though it is neither particularly personal nor particularly authoritative. Lots of people have the same or similar names as others; without some way to differentiate them, you’re not going to get what they seem to want you to get (unless your namesakes have little or no presence on the Internet). Not only that, but if you run it twice, you might get different results each time, which also seems less than authoritative (click for larger version):

Perhaps I’m taking everything a tad too literally. In any event, I think it’s a neat tool, and it was fun personas-ing some friends and colleagues, but it doesn’t quite seem to deliver what they say it will seem to deliver.