Nobody Expects the Singularity

“I don’t want to achieve immortality through my work,’ Woody Allen said, “I want to achieve it through not dying.” The “Singularity University” is attracting Silicon Valley glitterati who think along the same lines:

[T]he Singularity â€” a time, possibly just a couple decades from now, when a superior intelligence will dominate and life will take on an altered form that we canâ€™t predict or comprehend in our current, limited state . . . [will lead to a world where] human beings and machines . . . so effortlessly and elegantly merge that poor health, the ravages of old age and even death itself will all be things of the past.

Some of Silicon Valleyâ€™s smartest and wealthiest people have embraced the Singularity. They believe that technology may be the only way to solve the worldâ€™s ills, while also allowing people to seize control of the evolutionary process. For those who havenâ€™t noticed, the Valleyâ€™s most-celebrated company â€” Google â€” works daily on building a giant brain that harnesses the thinking power of humans in order to surpass the thinking power of humans.

Ezra Klein skewers the techno-utopianism, toying with the idea that we may well be robotized before we get electronic medical records:

Right now, one of the top stories on the New York Times site is about how human beings are going to become people-computer hybrids and live forever and that vision actually seems semi-plausible until you realize that all the information about the operation to download your memories into a Macintosh will probably be kept in a manila folder in a large filing cabinet, and then it doesn’t seem so likely.

But Klein neglects the trends toward tiering in the medical system, which may well continue forking into “upper decks” where anything is possible and nether realms of penury. As Andrew Orlowski comments, “The Singularity is . . . . rich people building a lifeboat and getting off the ship.â€ I think that progress in bioethics depends on a rejection of that kind of thinking in favor of a more solidaristic orientation toward the needs of the worst off. As I stated in 2002,

We are all disturbed by hypothetical dystopias like Huxley’s Brave New World. But their most important flaws – the inequality, degradation, and moral irresponsibility of their inhabitants – are already apparent in [some aspects of life in the] world’s wealthiest nations[, which] spend hundreds of millions of dollars on elaborate technologies of life-extension, while contributing much less to efforts to assure basic medical care to the poorest. Public debate on regenerative medicine must acknowledge this inequality. Societies and individuals can invest in it in good conscience only if they are seriously committed to extending extant medicine to all.

If “Singularity University” turns out to be a prime philanthropic initiative of the Google guys, while the Bill and Melinda Gates Foundation sticks to “progress in fighting hunger and poverty,” I know which tech company I’ll be rooting for. 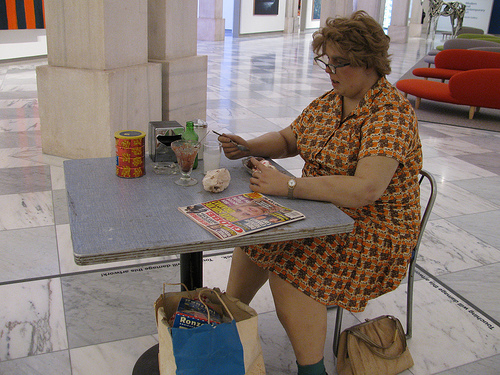 Image Credit: pdeonarain, and inspired by this story on the “uncanny valley.”