Symposium on Access to Knowledge in the Age of Intellectual Property

There will be an online symposium on the new book Access to Knowledge in the Age of Intellectual Property at Concurring Opinions this Tuesday to Thursday (Feb. 1 to Feb. 3, 2011). This book, edited by GaÃ«lle Krikorian and Amy Kapczynski, is available for free download here, and can also be purchased here. Here is a quote from the introduction that gives a sense of the book’s themes:

In a hospital in South Korea, leukemia patients are expelled as untreatable because a multinational drug company refuses to lower the price of a life-saving drug. Thousands of miles away, a U.S. group called the Rational Response Squad is forced by the threat of a copyright lawsuit to take down a YouTube video criticizing the paranormalist Uri Geller. Could weâ€”should weâ€”see these two events, so seemingly remote from one another, as related? Yesâ€”or such is the premise of a new political formation on the global stage, one that goes under the name of the â€œaccess to knowledge movementâ€â€”or more simply, A2K.

A2K is an emerging mobilization that includes software programmers who took to the streets to defeat software patents in Europe, AIDS activists who forced multinational pharmaceutical companies to permit copies of their medicines to be sold in South Africa, and college students who have created a new â€œfree cultureâ€ movement to â€œdefend the digital commonsâ€â€”to select just a few. A2K can also be seen as an emerging set of theoretical commitments that both respond to and reject the key justifications for â€œintellectual propertyâ€ law and that seek to develop an alternative account of the operation and importance of information and knowledge, creativity and innovation in the contemporary world.

Krikorian and Kapczynski have assembled a top-notch group of contributors, and we welcome comments from across the blogosphere. 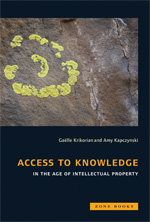