Skip to content
Posted on June 15, 2011 by Bruce Boyden in Copyright Law 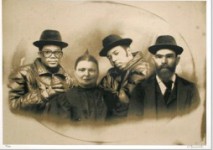 Brian Frye has an interesting post up over at Concurring Opinions on Friedman v. Guetta, a recent Central District of California case involving an altered photograph of Run-D.M.C. Somewhat like Fairey v. AP, the issues on summary judgement included whether the original photograph was copyrightable and whether Guetta’s use of it was fair. (You can see the original and altered photographs here.)

There’s lots of interesting issues there, but one that caught my eye is one that has been bugging me more and more every time I teach the fair use section of Copyright Law: the seemingly infinite manipulability of the transformativeness inquiry of the first fair use factor. Much seems to depend on how broadly or narrowly the purpose is defined, but that categorization is almost never accompanied by any discussion of the proper level of generality. Here’s how Judge Pregerson in Friedman defined the purpose of each work:

Here, Defendant has not offered a transformative alternative use of the Photograph image. Both Plaintiff and Defendant are artists, and the image was used by both in works of visual art for public display. Although the statements made by those respective artworks and the mediums by which those respective statements were made differ, the use itself is not so distinct as to render Defendant’s use a transformation of Plaintiff’s copyright.

“Works of visual art for public display” is a pretty broad category; almost every photograph for any purpose will fit that description. Surely that can’t be the proper level of generality. What was the more specific purpose for which Friedman’s photo was shot? To document the rise of a rap group? For an album cover? And what was Guerra’s purpose in making his alterations? The opinion doesn’t say.

In the instant case, DK’s purpose in using the copyrighted images at issue in its biography of the Grateful Dead is plainly different from the original purpose for which they were created. Originally, each of BGA’s images fulfilled the dual purposes of artistic expression and promotion. The posters were apparently widely distributed to generate public interest in the Grateful Dead and to convey information to a large number people about the bandâ€™s forthcoming concerts. In contrast, DK used each of BGA’s images as historical artifacts to document and represent the actual occurrence of Grateful Dead concert events featured on Illustrated Trip’s timeline.

Certainly the posters were being used in each instance as “works of visual art for public display.” But the Bill Graham Archives court conducted a more searching inquiry than that. To similar effect is Blanch v. Koons, 467 F.3d 244, 252 (2d Cir. 2006):

Koons does not argue that his use was transformative solely because Blanch’s work is a photograph and his a painting, or because Blanch’s photograph is in a fashion magazine and his painting is displayed in museums. He would have been ill-advised to do otherwise. We have declined to find a transformative use when the defendant has done no more than find a new way to exploit the creative virtues of the original work. . . . But Koons asserts — and Blanch does not deny — that his purposes in using Blanch’s image are sharply different from Blanch’s goals in creating it. Compare Koons Aff. at Â¶4 (“I want the viewer to think about his/her personal experience with these objects, products, and images and at the same time gain new insight into how these affect our lives.”) with Blanch Dep. at 112-113 (“I wanted to show some sort of erotic sense[;] . . . to get . . . more of a sexuality to the photographs.”). The sharply different objectives that Koons had in using, and Blanch had in creating, “Silk Sandals” confirms the transformative nature of the use.

This is not a Ninth Circuit vs. Second Circuit issue. Other Second Circuit courts, ultimately finding no fair use, have defined the defendants’ purpose more broadly. In Castle Rock Entertainment, Inc. v. Carol Publishing Group, Inc., 150 F.3d 132, 142 (2d Cir. 1998), the court defined the purpose of both worksâ€”the Seinfeld television series and a Seinfeld quiz bookâ€”as to “entertain Seinfeld viewers.” Only in Ringgold v. Black Entertainment Television, Inc., 126 F.3d 70, 79 (2d Cir. 1997), did the court reflect on the issue at any length, if only in a footnote:

n10 Of course, the creation of visual works serves other, often more important, purposes such as illuminating human understanding, providing inspiration, or provoking thought. Ringgold’s work, in telling and illustrating an informative story, might well serve these purposes, but it also significantly serves a decorative purpose.

The issue here reminds me a bit of one criticism of Justice White’s infamous opinion in Bowers v. Hardwick, which framed the legal issue as “whether the Federal Constitution confers a fundamental right upon homosexuals to engage in sodomy,” as opposed to how the 11th Circuit framed it, whether “private sexual conduct between consenting adults is constitutionally insulated from state proscription.” But the solution is not as simple as always looking for a more specific purpose. At some level, every defendant’s purpose will be somewhat different than the plaintiff’s; if nothing else, a defendant will always wish to use the plaintiff’s work in a specific way that the plaintiff did not authorize. But that can’t be the optimal categorization of purpose either.

This is not an issue that copyright law, or constitutional law for that matter, struggle with alone. Just today I came across this relevant passage while reading a draft article by Jonathan Cardi, The Hidden Legacy of Palsgraf: Modern Duty Law in Microcosm:

The inherent instability of categorical formulations of plaintiff-foreseeability stems in part from the lack of any principle by which courts define the scope of the foreseeable class. Take, for example, the police chase case cited in the previous paragraph. Although the Montana court defined the class quite broadlyâ€””people using the streets and highways where the chase occurred”â€”the class would have excluded a plaintiff injured by the careening police chase while watching it from the front porch of his house. A broader definitionâ€”for example, “people present in the area of the chase”â€”would allow recovery by such a victim. In the alternative, a court might deny liability by defining the class more narrowlyâ€””people asleep in their car on the side of the road,” “people interfering with the chase,” or “drunk drivers.” I discern no guidelines according to which courts determine how narrowly or broadly to define the class of plaintiffs into which a particular plaintiff must fit. In fact, courts rarely even disclose the reasoning by which they have derived the class.

Cardi then notes in a footnote that “[t]his is a common ‘scope problem’ in the common law, documented famously by Herman Oliphant. See Herman Oliphant, A Return to Stare Decisis, 14 A.B.A.J. 71 (1928).”

So it’s a problem that affects all common-law decisionmaking, which might fairly be said to include copyright, and certainly the fair use doctrine. And while I don’t have an immediate solution, I’ll settle for now for courts at least expressly recognizing the difficulty.