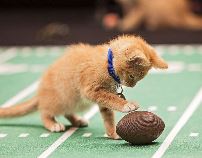 [Madisonian readers: I wrote this for a general audience. I’m reposting here for your amusement/fact-checking.]

The 48th annual Super Bowl is tomorrow, which means of course that people are thinking about intellectual property law. (Doesn’t everyone?) No, I’m not going to talk about whether your local grocery store infringes on the NFL’s trademark when they advertise “Super Bowl Savings,” except to pose the question of whether a single person ever has been actually confused about whether that indicates a relationship between the NFL and the grocery store. Or the makers of this thing. Rather, I’m going to talk about television. Specifically, what size television can you watch the Big GameTM on?

The NFL caused a bit of confusion on this score when they sent a cease and desist letter to an Indiana church back in 2007 that was planning on hosting a Super Bowl party for church members, with a fee for attendance and the game displayed on a “giant” TV. (I can’t find a description of the exact size.) In the letter and in subsequent pronouncements, the NFL took the position that it was a violation of copyright law to display the Super Bowl to a public gathering on a screen larger than 55 inches diagonally. In the face of likely congressional legislation in 2008, the NFL backed down and said it would not enforce its rule against church groups. But it still maintains that others cannot display the game publicly on sets larger than 55″.

News stories about the controversy have gotten some parts of the relevant copyright law correct, but are still a bit confusing on the 55-inch “rule” and where it comes from. So I’ll try to clarify. The short version: There is no 55-inch rule, at least not for the game itself. Read More »My Official Super Bowl Television Post

Copyright and the Mantei T’eo Case

By now, every sports fan has heard about the hoax apparently perpetrated against Notre Dame linebacker Mantei T’eo. And though… Read More »Copyright and the Mantei T’eo Case

According to Yahoo Sports, Florida State University has decided it wants to be the only Seminoles. FSU has apparently sent… Read More »Nothing like waiting 50 years to complain

As Seen On TV!