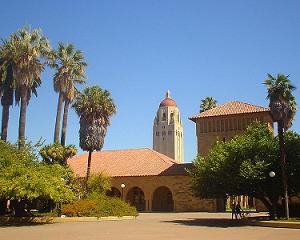 The Chronicle of Higher Education (subscription required so no link) notes that Hollywood tends to ask universities and colleges for permission before they set their films or television shows at a particular campus. So Felicity attends University of New York instead of NYU, and Legally Blonde is set at Harvard instead of, wait for it â€¦ University of Chicago? Odd but apparently true (my guess is that this turn of events helped the film. No offense to Chicago but as a matter of pop culture Harvard probably takes the prize). One possible culprit according to the article is our friend US News and World Report and the ranking game. Since the report started ranking undergraduate institutions films reference real schools, rather than random State U, 29 percent of the time as opposed to 19 percent before the US News games began. The claim is that references might seem to be endorsements. So Stanford only allows â€œaspirationalâ€ portrayals; read here goody-goody overachievers. The article claims that Stealing Harvard was originally Stealing Stanford, but the farm rejected that idea “Since Stanford is need blind” and the story of needing to steal to go to the school would be unreal (as many fictional stories are). In contrast, Harvard seems to realize that a fictional story is just that and seems more generous about the names and so on. Note that most schools are more restrictive about shooting on campus but may embrace the idea for the fees they can charge.

All well and good, but whether there really is a trademark claim as the article suggests and the schools seem to think (note that Dawsonâ€™s Creek also wished to avoid conflict and invented Worthington University as a generic Ivy although ironically shot at Duke) is troubling. The expansive notion of association seems to fuel this perspective. But as Sandy Rierson and I argue in the Confronting the Genericisim Conundrum uses such as these are expressive and in that sense irrelevant to the market transaction trademark is supposed to be about. On a similar wavelength Mark Lemley and Mark McKenna seem to be arguing that other uses of trademarks are not relevant to trademark analysis (To be clear, I have yet to read the paper, and it may be that this sort of use would be actionable according to Mark and Mark (or dare I say it? Dare. Dare. Mark y Mark?).

In short, if one considers the feedback loop in play here, the more expressive uses that are made, the less likely people will think that Standford endorsed a portrayal. In addition, what about more critical commentary that could be set a university? Setting up a system of permissions is dangerous. Last, maybe Harvard has it correct: people are not that stupid. They can tell the difference between a fictional story and a claim to reality. Canâ€™t they?