First, let me thank Mike and his crew for having me here.Â  I’ve often read Madisonian and am honored to be among the new participants.

I thought I’d start off talking about my increasingly inaccurately referenced “summer reading list”.Â  In other words, I bought a pile of books over the summer, didn’t read them and am now trying to finish them.Â  So I just finished reading Thunderstruck by Erik Larson (author of Devil in the White City which I also really enjoyed). 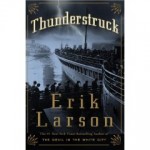 This is yet another historical novel in which Larson weaves together the history of a developing technology – in this case wireless telegraphy – with the history of a very public murder trial around the turn of the 20th century.Â  Larson has a terrific way of making things like fighting over early patents for wireless telegraphy incredibly suspenseful andÂ  interesting.Â  He also does a lot with the material about the Harvey Crippen murder trial – of which there apparently isn’t much.Â  So he uses the historical record such as it is to weave together a really amazing murder mystery.Â  He then links the two stories together through the device of explaining the impact on the murder investigation of the newly developed wireless telegraph system.

Larson used a similar approach in Devil in the White City to link together the stories of the Chicago Worlds’ Fair with another murder trial – and that’s an extremely interesting book as well, but while I’m on Madisonian, I figure I better focus on something that has something to do with IP, so I guess patents and telegraphy fit the bill.

2 thoughts on “History, Literature, and … Patents”