Adam Raff, in an Op-Ed in the New York Times yesterday, says that Google

“faces a difficult choice. Will it embrace search neutrality as the logical extension to net neutrality that truly protects equal access to the Internet? Or will it try to argue that discriminatory market power is somehow dangerous in the hands of a cable or telecommunications company but harmless in the hands of an overwhelmingly dominant search engine?”

It’s a short Op-Ed, which may be part of the problem, but I find the argument rather perplexing.Â  I think many of us are justifiably concerned about the scope of the power that Google enjoys through its dominance in Web search.Â  Frank, for instance, has argued that the FCC should be more involved in Google’s business.Â  Yet if the FCC is to say something specific about search, what exactly can it say?Â  What would “search neutrality” policy look like?

Raff, who feels his company has been penalized by Google’s prioritization of its own services, says “search neutrality” is “the principle that search engines should have no editorial policies other than that their results be comprehensive, impartial and based solely on relevance.”

Solely on relevance?Â  Whose opinion of relevance, exactly?

Personally, while I think we should be paying attention to Google’s use (and potential abuse) of its market power in search, I’d want to see the details of a search neutrality policy in advance.Â  The concept of net neutrality is hard enough to fathom — I don’t think we can just “expand it” and solve the problems that arise in search.

Update: I see Rob is editing a post on this same Op-Ed — glad to see I’m not the only one confused…

Update 2: For what it’s worth, part of the reason this Op-Ed grabbed my attention was that it received rather prominent placement on the Times home page: 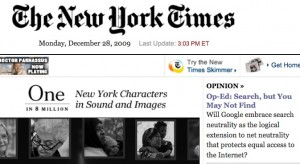 2 thoughts on “What is Search Neutrality?”