There is a lot of discussion these days of new media and what new media mean to old media. In some cases, existing (or mainstream) media have attempted to adapt to the new technologies of distribution. Sometimes they do a good job. At other times, not so much. And sometimes, it’s just plain strange.

Case in point: The NY Times often includes “resources” next to links for its stories or multimedia content on the Web version of its newspaper. On the site today, I found the box shown in the image. The main link is to an interesting discussion by writers on books they would never part with. The “resources” are links to pages on “what books to throw out and why itâ€™s a good idea to clean oneâ€™s home library.” The problem is that the links are wrongly identified, don’t actually relate to that topic, or where they do, are seriously tongue in cheek. 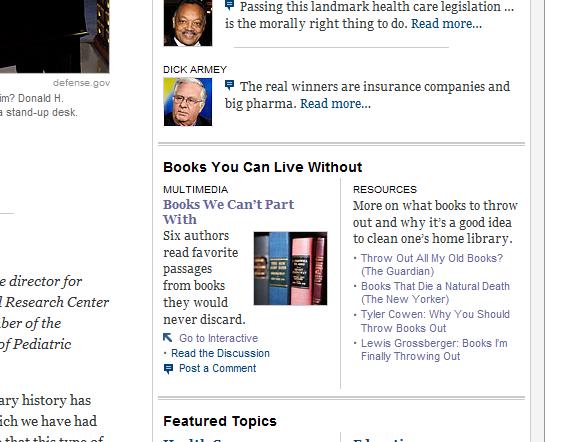 The first link is to a piece in the Guardian; except, it is not in the Guardian, it is a Huffington Post piece by Lewis Grossberger (more on this later, as it gets its own link). I could not find any relevant stories in search the Guardian website.

The second link is to a story in the New Yorker about books that die a natural death, which doesn’t talk about books you’d throw out, but rather about a proposal by Virginia Woolf that first runs of books be printed on paper that degrades/disintegrates, so that if no second run was needed (ie, if the book was no good), the first runs would simply disintegrate.

The third link is to a piece by Tyler Cowen that actually talks about the subject; he argues you should throw average books out so that others don’t waste their time reading them. Interesting point, but the post is hosted on a publisher’s site (Penguin Books), who I am sure would love you to throw out old books rather than taking someone’s attention away fromÂ  their new books.

Finally, the fourth link is to the Lewis Grossberger post at Huffington Post referenced (and linked to) in the first link, above. The problem? Grossberger makes his books up. That’s right, they’re not real books. The plot summaries are hilarious at points, and there is a lot in the whole piece to think about (in fact I highly recommend this one), but it’s not about throwing real books out.

I’m hoping the N.Y. Times is paying more attention to its main stories than it is to the “new media” additions to its primary content.