Soccer Technology: Too Much Innovation?

The World Cup finals begin in two days, so there is more football blogging to be had.Â  Today’s topic:Â  Innovation.Â  Does football have too much of it, too little of it, or just the right amount?

This sort of question is often raised in the middle of debates about the relationship between intellectual property law and society at large.Â  IP law seems to rely on the general premise that innovation is always socially valuable (“Progress,” to borrow the term from the US Constitution), so critics are quick to jump on examples of situations where innovation may have done more harm than good, or may have been been wasteful, or may simply have redistributed wealth without creating any new value.Â  The best known recent illustration are the broad variety of innovative financial products developed by the wizards of Wall Street.

IP’s general “innovation is good” premise is subject to all kinds of checks, even within IP law itself, but it is nonetheless interesting (and fun!) to find “innovation is bad” stories in order to explore what, exactly, is going on.Â  Are skeptics nostalgic for an older way?Â  Fuddy-duddies who can’t adapt?Â  Third parties injured by spillovers?Â  Regulators overwhelmed by new complexity?Â  Something else, or some combination?

The football connection is this:Â  The football itself.Â  For this year’s World Cup finals, adidas has again produced a new and official (i.e., FIFA-endorsed) ball, the Jabulani.Â  A second ball using “Jabulani” technology, the Jo’bulani, will be used in the final match.Â  And as they have done at several tournaments in the past, many of the players, especially goalkeepers, are complaining about the ball’s unpredictable flight. Even as a spectator, having watched some friendlies played with the ball, I can tell that the ball soars or sails in flight beyond the expectations of both goalkeepers and field players.

So should anyone care?Â  The ball remains round, and it remains essentially the same size that it was before.Â  Should players simply adapt?

adidas has introduced a new ball and new technology at just about every World Cup finals since 1970.Â  The 1970 edition was the Telstar, which standardized the now-classic black and white pentagon/hexagon design.Â  (Here is an illustrated history of modern World Cup finals footballs.)Â  Much of the novelty is simply marketing hype that benefits FIFA (which co-brands the “official” ball) and adidas, which sells copies of the ball at various price levels.Â  It is always possible to buy a copy of the “official” World Cup ball at your local sporting goods or soccer store for $49.95; what you buy is a ball that serves perfectly well for day-to-day play but that does not include the high tech bells and whistles that the national teams encounter. 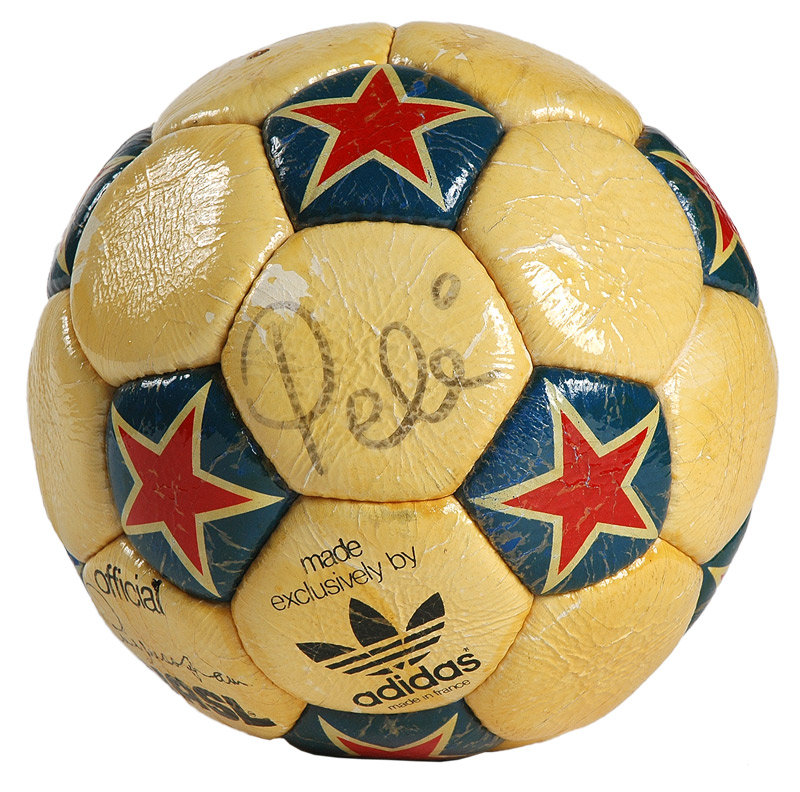 American professional soccer has similarly offered “branded” balls.Â  In the early 1970s, the old North American Soccer League and adidas teamed up to offer a version of the Telstar ball that had red starsÂ  on blue backgrounds in place of the black pentagonal panels.Â  As a youth player, I was thrilled any time a “NASL ball” (we pronounced this “nasal ball”) showed up at practice under the arm of a coach or teammate, or better, any time one was used in a game.Â  The NASL ball was lighter than its predecessors.Â  More important, it was cool.Â  In the 1990s, Major League Soccer went the same route, partnering with Mitre to produce a green, blue, and white ball that borrowed the pre-pentagonal/hexagonal design.Â  That ball wasn’t as distinctive to play with as the NASL ball, but it sure looked nice, and MLS used it pretty effectively as branding.Â  Next time you watch As Good As It Gets, with Jack Nicholson and Helen Hunt, look for the MLS product placement.

Up to a point, innovative ball technology has clearly improved the game since the early 1970s.Â  Balls now hold their round shape despite getting old or wet.Â  Balls now use synthetic materials that don’t absorb water.Â  Balls are lighter and easier to control.Â  Modern balls likely travel faster in flight than their predecessors (so I assume – and does anyone else remember a German Chicago Sting player named Karl-Heinz Granitza, who had a cannon of a left foot?), but perhaps cause less damage when they strike the head (and the head strikes them).Â Â  I say “perhaps” because I don’t want to wade into concussion controversy territory.Â  A handful of players today wear protective headgear.

Standardization of these features has also improved the game.Â  Anyone who played in the early 1970s or before can remember encountering balls of varying weights and materials.Â  This week I’ve been watching YouTube videos of “greatest World Cup teams” and “greatest World Cup goals,” and especially for games and tournaments played before 1970, I’m struck by what appears to be the relatively slow general pace of play.Â  The speed of the modern game, and its excitement, appears toÂ  due largely to changes in the ball.

Football isn’t the only sport to have introduced new ball technology over the years, though it is likely one of the few to have introduced it in such a public, regular, and calculated fashion, capitalizing on modern marketing as well as on the dynamics of the sport itself.Â  And it appears to be the only sport in which the purposeful introduction of a new ball regularly brings cries that innovation in technology has somehow changed the nature of the competition itself. Â  Baseball mostly adheres to the myth that baseballs have never changed, though there have been “live ball” and “dead ball” eras.Â  Tennis balls and golf balls have changed quite a lot with technology.Â  I know that golf regulators are zealous about preventing players from using ball and club technology to obtain an excessive competitive advantage.Â  Do tennis players complain like football players do? Â Â  The National Hockey League experimented with hockey pucks that showed up better on television, but abandoned that experiment.Â  If FIFA and its new-ball-every-four-years represents one of an innovation spectrum, Olympic curling rules represent the other end:Â  In Olympic curling competition, competitors may use only Blue Hone granite from the Scottish island of Ailsa Craig. And that material is being depleted.Â  To my knowledge, no one has yet accused FIFA of creating an altogether different sport via introduction of new balls.Â  But if curlers don’t use Blue Hone granite, is it still curling?

Meanwhile, my judgment about the new World Cup ball is that the ball is like the field and the weather.Â  In any given match, all of the players on both sides of the ball are dealing with the same conditions.Â  Play on.