Pittsburgh is all over the news this week because the Pittsburgh Steelers will play the Green Bay Packers next Sunday in the Super Bowl.Â  But in theÂ IP world, two other Pittsburgh icons are about to face off.Â  And neither of them is Girl Talk.

In this corner:Â  Emerging Pittsburgh-based rap star Wiz Khalifa.Â  Check out the t-shirt that he’s wearing in this video: “Damn It Feels Good to Be a Taylor.”

The shirt, like the video, is a smash.Â  Here’s a version that’s easier to see: 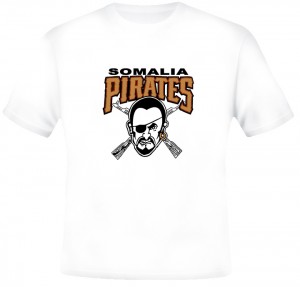 The t-shirt design is by Pittsburgh firm Blastfome.Â  You can buy it here.Â

Enter, in the other corner,Â Major League Baseball.Â  Casual sports fans may not know this, but die-hards do:Â  Pittsburgh is the home to a team that competes in the major leagues.Â Â Note that I am not arguing that Pittsburgh has a major league baseball team.Â  Pittsburgh is home toÂ the Pirates, a team with a rich long term history but a pathetic recent record.Â Â  Eighteen consecutive losing seasons — a professional sports record.Â  But losses on the field don’t translate into losses in the front office.Â  Quite the contrary.Â  The Pirates are as profit-minded as the next team.Â  And the Pirates’ logos and other marksÂ are controlled, to a significant degee,Â by Major League Baseball.Â 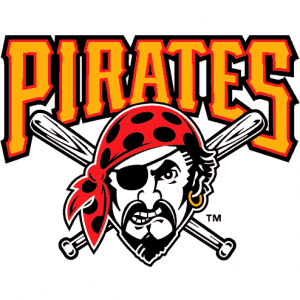 The Pirates’ current logo is at right.Â  I understand that MLB is now coming down on Wiz, or perhaps the designers and marketers involved with the t-shirt, or both.Â