In recent years (and particularly since reading a lot of Bobbi Kwall’s work), I’ve been increasingly interested in motivations for why authors/artists create and in the relationship between economic incentives and creativity.Â  One of this year’s Oscar nominated documentaries (Exit Through the Gift Shop) is actually an interesting exploration of some of these issues. 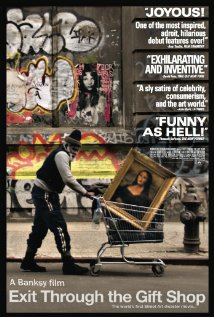 It explores the world of street art in a number of different countries and cultures and appears to identify a norm where street artists have to first establish their credibility in a noncommercial manner and then move to commercializing their work.Â  There are some criticisms of the main protagonist in the film who is seen as having commercialized his work either too early or before having established his credibility as a serious street artist.

It’s really a fascinating look at an area of creativity that is not often studied or written about.

3 thoughts on “Creativity and Norms”