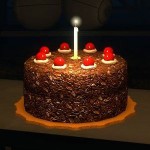 I’m a bit slow in posting this, but last Friday I heard this interesting interview with John McCrea of the band “Cake” on NPR’s All Things Considered. This part caught my attention: the host, Melissa Block, noted that Cake’s album “Showroom of Compassion” debuted on the Billboard 200 chart at No. 1â€”the catch being that it was the lowest No. 1 ever.

BLOCK: [W]hat does that tell you about where the music industry is right now and what the, you know, what the future of recorded music is?

McCREA: Oh, I’m very pessimistic about it. You know, can you put food on your table with music? Probably not. I think I see music as a really great hobby for most people in five or 10 years.

I think there will always be a level of, like, Lady Gaga and, you know, that sort of celebrity artist. But I don’t know, like, the middle class of music. I see everybody I know, who I think, you know, some of them really important artists, are studying how to do other jobs.

This supports an important point: the standard incentive story we tend to bat around in U.S. copyright and patent circles is more complicated than it’s typically given credit for.

I often have fun on the first day of my Copyrights class, as I suppose many IP professors do, talking about the standard utilitarian rationale for copyrightâ€”that it’s necessary in order to incentivize authors to createâ€”and then immediately deflating it, at least in part. Obviously it’s not the case that without copyright there would be no creative works. There were plenty of them before copyright, and lots of people produce lots of stuff now without any expectation of remuneration. The idea is that copyright produces some additional number of works at the margin. There’s a line of scholarship currently being written in this vein demonstrating the various motives even successful authors and artists tend to have (to say nothing of professors) in creating something, of which financial rewards may for some be only a small part.

But adding epicycles on epicycles, even authors who might originally produce works without much expectation of financial reward nevertheless will find it difficult to keep producing without it. That is the point that I think the McCrea excerpt demonstrates. There’s only so long you can live as a starving artist before you have to, well, spend some substantial chunk of your time doing non-artist things, like waiting tables. And that’s just the archetypal single-artist model. There are works that are probably impossible to create without the promise of required remuneration, such as large-scale film production or video games. And we’re not even talking about distribution, which, while cheaper now than it once was, is still far from costless. I therefore think that while the “authors have a lot of different motives to create” literature is interesting, its policy implications are somewhat limited, at least until we know more about the role of compelled compensation to the whole system.

8 thoughts on “Incentives, Food on the Table, and Cake”