Cars lives in Target (but not in me)

In my article written a few years back about Google, trademark, and search regulation, I used “Cars” (more or less randomly) as a representative search term with both a trademark and a descriptive meaning.Â  I found it interesting that about half of Google’s results were for automobiles while the rest were for the Disney movie. A search a few seconds ago shows roughly the same result — perhaps with the descriptive meaning gaining a little ground. In the article,Â  I also noted that the trademark “cars” was not a mark owned exclusively by Disney — some other companies used the word as a mark in relation to other goods and services. Last night at my visit to Target, the “Cars” trademark jumped out at me again. 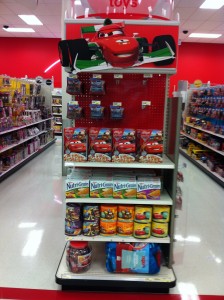 The picture shows an “endcap” in the toy section of a local Target store.Â  I just finished writing a draft of a forthcoming article that is, more or less, an appeal to jurists to respect the traditional role of trademarks as designators of the sources of particular goods and services. But what sorts of goods and services do consumers associate with “Cars”?Â  The Cars mark is used here to sell not just toys, but (from the bottom up): snacks, a comforter, tissues, Nutri-Grain bars, and cereal.Â  Breakfast with Batman Cars, indeed.Â  Walking around Target, the “Cars” brand was almost everywhere.Â  It was hard to find any section of the store that didn’t have something (towels, notebooks, clothing) that featured the “Cars” brand.Â  Talk about ubiquity.

I admit I found the experience a little disquieting from a trademark policy perspective.Â  Looking around the toy section of the store, it was hard to spot any toy that was really just a toy marketed as valuable in itself.Â  Well over half of the toys were tied in to the promotion of various Hollywood movies and brands (Tranformers, Star Wars, Harry Potter, Marvel). Apparently, Disney, Warner, etc. and the toy companies agree this is the way to go.Â  But is the invisible hand really helping us out here?Â  Is there any argument that really we’re better off with Hollywood owning Target’s toy section? Do we get better toys with this use of brands?Â  Probably not, but, as Mark Bartholomew recently explained, a lot of people have objected to this sort of thing over the last 100 years, and the tide of brands keeps rising.

Over in the video games section, I noticed that about half of the titles advertised for the PS3 were also tied into Hollywood’s latest offerings. My son and I were looking at school notebooks and we thought it was kind of interesting that the Transformers-branded notebook is holographic — maybe you’re not just advertising the film (and its associated merchandise) to other kids in school, you’re also advertising the push toward 3D? Yay.

Other than wondering about whether the Cars(tm) invasion of Target was a good thing in general, I was also wondering how far this is going to go.Â  I didn’t look like Cars(tm) had much of a foothold in light bulbs, gardening equipment, duct tape… it wasn’t as if absolutely everything in Target was tied into merchandising rights for a movie.Â  Will that still be true 20 years from now?

I probably won’t see Cars 2, by the way.Â  I did see the last one and I thought it was pretty good — I found the Route 66 nostalgia in it curiously ironic.