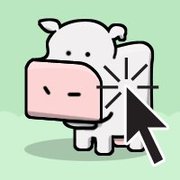 I really enjoyed this OTM story on Ian Bogost’s game, CowClicker. The game allowed players to click on a cow, which would moo. It was as easy as hitting the broad side of a barn door with a snow shovel. So far, so Pavlovian. But, as Janet Murray explains, the game changed over time:

CowClicker was meant to parody the wildly successful Facebook game Farmville, exposing its unchallenging and pointless gameplay and its cynical commercialism. But to Bogos’s dismay his intentionally boring game unexpectedly attracted 50,000 users. Stunned out of his customary ironic detachment, Bogost found himself unable to resist the direct “pleasure” of having people play his game. He began to pay attention to what they liked and to fulfill their requests, though he was bothered by their unironic pleasure in the gameplay. . . . Eventually he resorted to outright destruction, starting a counter that ended with a satisfyingly absurd “rapture” that left no cows standing, just a little clickable shadow in the pasture: a “cowpocalypse”! Yet even the “cowpocalypse” was not enough to erase the enthusiasm of the fans . . .

At this point, Bogost could have easily embraced a Marcusean attitude (diagnosing, as Charles Reitz puts it, “alienation in the midst of affluence, repression through gratification, and the overstimulation and paralysis of mind”). He instead drew the following lesson:

It shows us how weird and complicated simple things really are, and shows me not that like I’m some sort of brilliant designer who made this thing that was bigger than I thought it was, but how resilient and creative people are. I did this thing that was Cow Clicker, and in spite of it, they rose above and, and made it — made it something more than it really was.

I thought Bogost’s perspective offers encouragement as the 2012 election season rolls around. Much of the coverage and dialogue around the event has the cognitive complexity of CowClicker. A tiny fraction of the population will have real influence; we won’t even know who they are until after it’s over, if then. The real problems of the country will not be addressed. Decline will either continue as before or accelerate. But in the midst of all that, it is possible to find some expressions of community and purpose.