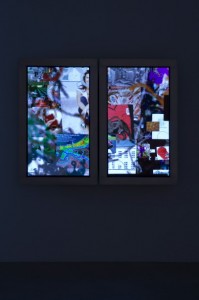 A few years ago I tried to express some anxieties about the rise of a remix culture that valued technology and novelty over timeless content. Those worries resurfaced while I was reading Rob Horning’s recent reflections on his own defensively reactionary tastes:

[T]he key issue is to think about why we choose novelty over immersion. Why do we choose convenience — the speed of consumption — over the sensory qualities of a consumption experience?

What [Simon] Reynolds dubs retromania seems a paradoxical way for capital to proceed to secure ideological dominance, but it makes a diabolical sort of sense: get novelty and innovation on the cheap by recycling the ready-at-hand past. This has the added bonus of fusing the new with the familiar, so consumers can appease two contradictory longings simultaneously. Nostalgia and novelty fuse in a new kind of cultural artifact, which Reynolds spends a lot of time cataloging: stuff like I Love the ___’s, reunion tours, bands playing their old albums in sequence, Web 2.0 music like Flying Lotus, Girl Talk, etc.

The fusion of “new and the familiar” also reminds me of the ideas of “flocking and differentiation” in the Hemphill/Suk article on fashion. Rather than being epiphenomenal, one more sad aspect of status anxiety, fashion to Hemphill and Suk is an authentic expression of a broader dialectic of individual self-creation: to both conform to social norms and to distinguish oneself from them. Christening these impulses “flocking” and “differentiation” (respectively), Hemphill and Suk see fashion as not merely an economic phenomenon, but a cultural one, reflecting deep-seated human needs. But a rapid and fruitless cycling between bedazzlement and boredom could just as accurately characterize fashion trends as an ennobling narrative about “flocking” and “differentiation.”

Who knows whether fashion, or the fused nostalgia/novelty Horning describes, is a component of authentic self-expression, or a form of false consciousness? As Denis Charles Philips explains, “many rival narratives can be devised by an individual to account for a given action, just as, in natural sciences, many rival hypotheses can be invented to account for any finite body of data.” The law of culture can be vexing in part because we can disagree so profoundly about the right narrative “frame” for the phenomena we encounter.

It’s tempting to simply refuse to give an account of value, or even intention, in some circumstances. When we move from processes of appreciation to those of creation, that’s an increasingly popular strategy. Richard Prince appeared to retreat to the realm of the non-rational at a recent deposition in a celebrated copyright case:

In a deposition in the case that was recently published as part of an unlikely art book by the writer and director Greg Allen, lawyers for [plaintiff] Mr. Cariou follow [defendant] Mr. Prince deep into the strange and often trackless territory of artistic intention. About as close as they get to pinning him down is that he wanted to use the borrowed pictures to explore his fascination with the painting of Willem de Kooning and also thought of his collages and paintings as part of an idea for a movie about a post-apocalyptic world in which Rastafarians, famous literary lesbians and others commandeer hotels on St. Bart’s.

“So what are four lesbians from the early 20th century doing on St. Bart’s in, now, when there’s a nuclear war, like why are they there?” a lawyer asked Mr. Prince, who responded: “Your guess is as good as mine. That’s what I do, I make things up.” At another point in the transcript of the deposition, a lawyer asked, “What is the message?” Mr. Prince replied, “The message is to make great art that makes people feel good.”

Maybe Prince also answers Horning’s initial question, “why we choose novelty over immersion”? Or perhaps we should turn to Sven Birkerts, who observed, in The Gutenberg Elegies, readers “awed and intimidated by the availability of texts, faced with the all but impossible task of discriminating among them, [tending] to move across surfaces, skimming, hastening from one site to the next without allowing the words to resonate inwardly.”

Information overload has an aesthetics; only time will tell if it’s deep or shallow. While that debate rages on, Horning grounds us in the material foundations of an oppositional stance:

Value now is captured by harnessing the filtering that consumers perform for one another, monitoring the lateral cultural chatter and trying to time the implied markets. This is another aspect of the retromania phenomenon. Amateur bricoleurs sort through the digitized detritus of the past (Danny Kirwan solo albums, Falco, etc.), trying to make cultural capital out of it. How one feels about the question of resistance probably depends on how successful one is at that task.

The lords of the memes (or, in Jaron Lanier’s terms, lords of the clouds) aren’t complaining, and support a fair number of projects designed to defend the status quo. But we also need to think about the cultural consequences of a class of newly empowered sorters, filterers, and curators centrifugally pursuing their bliss. A literature criticizing the narcissism of the “daily me” has already done that for politics and journalism. Can a similar project work in culture, without being abrasive, elitist, or sectarian? Spiritual traditions attempt to identify the enduring truths, forms of beauty, and institutions of justice that contribute to human flourishing. Do they have a place in the normative evaluation of culture that lies a bit beneath the surface of legal cases like Prince’s? Could a new Adorno enliven the rights/utility literature in this area, which seems to have hit a dead end? Remix culture owes a great deal to postmodernism. Perhaps a critique of it will need to rely on both religious thought’s appreciation of tradition and critical theory’s willingness to interrogate enlightenment accounts of autonomy.

Image credit: Siebren Versteeg and whatever random viewer caused those images to appear on the touchscreens.