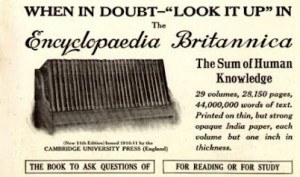 Print is Dead. Long Live the Word. Britannica Stops the Presses. Welcome to the Henry Blake cliche festival. CNN Money reports that after 244 years the print edition of Britannica will no longer be offered. As many may recall, one study indicated the Wikipedia was close to as accurate than Britannica. It may come as no surprise to those who know me that I tend to ask questions. My parents we of the “Look it up” school of thought. They bought World Book (remember them?) which fell short of my needs quickly. Then they bought a set of Britannica. It was lovely. Leather (or simulated perhaps), gilt edged, the micro and macro pedias, lined up in the den on wooden shelves. I ceased talking to my parents and went to the books. I loved them. In grade school, I learned that they were not to be cited but used to guide deeper research. Yes, grade school. So I was quite fortunate. My parents could afford such a luxury, and I reveled in it.

But let’s not obsess over print. Yes, analog copies are more difficult to reach out and destroy. I questioned the ability to manipulate e-books when I wrote “One possibility of the new technology is that books will continually evolve as authors change their mind or update a text. This idea brings images of revisionist Greedo shootings.” That ability was connected to Orwell in theory, and then when Amazon in fact used the power to remove a book, (remember it was in fact Orwell’s 1984?). But think about the costs for buying the research tool that was a multi-volume set. Today the print edition is $1395. I think was more when I was a kid, and that they used a model familiar to academics and software users (pay for updates) to generate revenue after the first sale. You also had to have room for the books. Digital divide and access to knowledge discussions can miss that the cost of the set would cover Internet access for 20 months. Of course one needs a computer too. But the computer and the Internet access can do much more than access one set of data. I suppose someone could study the cost of paper, binding, and shipping compared to the energy and materials for a computer and connection to see the true saving or lack of it. I will bet the numbers favor general purpose tech (Frischmann infrastructure ideas may be invoked here).

Digital also is a dream for the look it up model. I disagree with Carr and the Shallows analysis here. Yes, I look up things when on my e-reader (still a Kindle in fact) or online. And guess what I return to the text. I taunt students when they fail to look up words or ideas despite having the Internet at their fingertips almost all the time. To me online resources are great and to be embraced while also addressing the archiving and other issues new technologies raise.

Britannica’s President Jorge Cauz said some interesting and funny things to print junkies, “Everyone will want to call this the end of an era, and I understand that,” Cauz says. “But there’s no sad moment for us. I think outsiders are more nostalgic about the books than I am.” Given that he stated print was “less than 1% of the company’s total sales” he seems wise, and one wonders at why they didn’t kill it sooner. Other curious facts include that the online version is only 15% of revenue and “The other 85% is sales of education products: online learning tools, curriculum products and more.”

Will folks pay for the online version at $70 per year? I would guess not. Nonetheless Cauz claims that people interested in expert opinions will turn to Britannica: “Google’s algorithm doesn’t know what’s fact or what’s fiction,” Cauz concedes. “So Wikipedia is often the No. 1 or No. 2 result on search. But I’d bet a lot of money that most people would rather use Britannica than Wikipedia.” So far the evidence seems to be to the contrary. Wikipedia seems to hold up well. Stanford’s Encyclopedia of Philosophy is great too. I have argued that commons-based, Benkler goods could collapse, but for now they seem to be doing well.

So go with God, Britannica. Thank you for the years of service and enhancing my childhood. And congratulations on your new form. Like those in Good To Great, you have ditched the old method and seek to play in the new space. It is a bet, but it you are in the correct game and that is good.