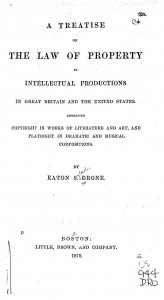 From the preface to Eaton S. Drone’s Treatise on the Law of Property in Intellectual Productions (1879):

Meaningless, inconsistent, and inadequate statutory provisions, ambiguous, erroneous, and conflicting decisions cover the the law of copyright with doubt, difficulties, and confusion. Some of the evils which result from these causes are but seeming ones, which disappear when explained, or lose their force when exposed. Others are real, and of such a nature that they can be overcome only by the power of the legislature. This condition of the law is doubtless due in a measure to the facts that the nature of literary property is somewhat peculiar, that the law relating to it may be regarded as yet in its infancy, and that it is comparatively seldom that courts are called upon to determine its meaning. But much of the error and confusion which exist can be accounted for only on the theory that the statutes have been often drawn by incompetent persons, and often interpreted by those who, however learned in other branches, have had but a limited knowledge of the law of copyright.