Skip to content
Posted on July 18, 2012 by Bruce Boyden in Copyright Law 2 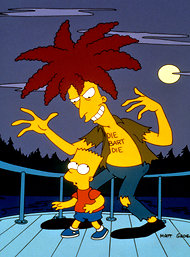 Mike linked below to this morning’s New York Times article on “3C,” an off-Broadway play that got a cease-and-desist letter from the copyright owners of Three’s Company (which, interestingly, is not a major media company but something called “DLT Entertainment,” apparently related to the show’s original producers). It’s hard to tell from the article what the merits of the arguments on either side might be — for example, was the “parody” just a straight-up delivery of one of the episodes of the show? (Even that might be transformative, but it pushes the edge of the envelope — a la “Airplane!“.) Or is it just a setup that is meant to remind audience members of “Three’s Company,” somewhat akin to the infamous “James Bond” commercial in MGM v. American Honda?

But that’s not why I’m posting. I just wanted to call attention to another interesting parody/transformativeness/commentary issue raised by a recently concluded off-Broadway play — way off-Broadway — one that cropped up a couple of months ago when I was too busy to blog about it. It’s linked to in the “3C” article: “Mr. Burns, a Post-Electric Play.” The premise of “Mr. Burns” is, according to the Times review, that:

a group of survivors commit [the Simpsons episode] “Cape Feare” to memory with a rigor that would do the manuscript-copying monks of Ireland proud. Over the ensuing 80 years, however, performances of the episode become a copy of a copy of a copy, rendering the original unrecognizable as it morphs to address the needs of its listeners.

The result is a ritual that becomes, as probably all rituals do, a version of the “telephone game.” The source material for this treatment is particularly inspired — not only is it absurd on its face to have an entire society revering a Simpsons episode, but this particular episode is of course itself a parody of Martin Scorsese’s “Cape Fear,” which in turn is a remake of the Gregory Peck/Robert Mitchum 1962 film “Cape Fear,” which in turn is adapted from a 1957 novel, The Executioners. The end result likely resembles a cross between the “Captain Walker” story of Mad Max 3 and “Monday” from the X-Files. (Or maybe the “holy words” from the Star Trek episode “The Omega Glory” mixed with “Cause and Effect” from the Next Generation, if that’s more your idiom.)

That sounds pretty transformative, and interesting, if a bit repetitive. And as far as I know, it didn’t draw a cease-and-desist letter from Fox.

2 thoughts on “Simpsons as Post-Apocalyptic Ritual”