The Power of Technology

I am regularly amazed by the amount of computing power we carry around with us. This is especially true given that the potential for the “computing power” revolution was largely missed by many of those involved in computing as it started to grow:

“Computers in the future will weigh no more than 1.5 tons.”
Popular Mechanics, 1949

“There is no reason for any individual to have a computer in his home.” Ken Olsen, co-founder of Digital Equipment Corporation, 1977

Or maybe three out of four homes will have at least one computing device (2010 statistics; see table 1C; given that “handhelds” were included and the data is from 2010, I’m guessing that number has increased significantly)?

So much for the predicting (though Arthur C. Clarke seems to have gotten it largely right). [The “missed predictions article includes the now infamous Bill Gates “640K is more memory than anyone will ever need on a computer” quotation, but given that Gates has disavowed ever making this statement, and there’s no good proof that he did, it’s probably best to leave Gates out of this one.]

But even though the predictions were wrong, and many of us carry around significant amounts of computing power every day, we don’t always realize what it is that we have or just how much that power can do. Case in point: 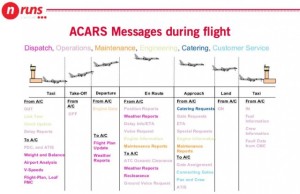 Apparently you can hijack an airliner by hacking into the planes [sic] system with an android smart phone!

Animalnewyork.com reports that at a security conference in Amsterdam, hacker and researcher Hugo Teso demonstrated how to hijack a plane’s controls from the ground using his Android smartphone.

So, it can be done without the hacker having to be on the plane at all?! Creepy doesn’t even cover it! Teso exploited the Aircraft Communications Addressing and Report System (ACARS), which controls planes’ flight management systems and has very little in the way of security.

More details here and here; this is the full presentation in PDF. I remember being upset when I heard that people might hack the Hoover dam (hint, they can’t, it’s not connected to the Internet). But you can hack an insulin pump for diabetics. And the electric grid. And maybe those wireless brain implants (okay, those aren’t really in use yet, but once they are . . . ). Maybe this is all overplayed — the aircraft hack article ends with this claim from Honeywell, the company that makes the relevant systems:

“[T]he version he used of our flight management system is a publicly available PC simulation, and that doesn’t have the same protections against overwriting or corrupting as our certified flight software.”

I guess I’m still not particularly impressed, but I am intrigued by even the potential for a remote aircraft hack, and the policy and liability issues raised by this and other vulnerabilities as computing becomes more and more pervasive in our daily lives. Fascinating stuff.