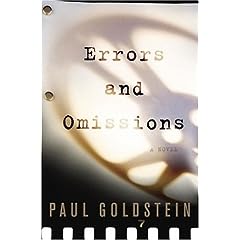 Errors and Omissions, the new novel by Stanford copyright maven Paul Goldstein, isn’t about much: A copyright lawyer on the brink of personal and professional disaster gets caught up in the shenanigans of a studio boss, the Hollywood blacklist, and — of all things — Community for Creative Non-Violence v. Reid, the Supreme Court decision interpreting the work-made-for-hire doctrine. Alcohol and mayhem ensue, along with some inscrutable plot twists and ruminations on the nature of art.

I liked the book (more than The Glom’s Gordon Smith did, I think), despite the slow pacing and the predictable ending. In fact, despite one important but obscure weakness, I think that the pacing and the ambiguities in the development of the lead character are strengths, not problems: In the right hands, and with the right cast, this will make a terrific piece of noir filmmaking. It has the essential ingredients: Los Angeles setting. Morally questionable lead. Plot so obscure that almost no one will understand what’s happening or why, even the cast. Pace that’s so slow that it borders on dull. Villain with a great back story. Alcohol. Mayhem. Ruminations.

I had no trouble imagining Bogart and Bacall as Mike Seeley and Julia Walsh. Put Kevin Spacey (or the suddenly ubiquitous Paul Giamatti) in the lead and cast Scarlett Johanssen as the academic. Or reverse the gender of those roles: Put Virginia Madsen in the lead (or the underappreciated Rachel Griffiths) and cast Jude Law as the academic. Professor Goldstein knows Hollywood. I’m willing to bet that he’s already sold the rights, and for all I know he wrote the book with specific actors in mind.

Here’s the obscure weakness: Throughout the book, the studio execs and the author complain that the Supreme Court made a mess of Hollywood’s standard ways of dealing with writers. This is an obvious reference to Reid, but why blame the Supreme Court? Why not blame Congress? After all, until the 1976 revision the work-made-for-hire doctrine was a judicial construct; Congress codified it. The Reid Court was interpreting the statute. Is Goldstein making a subtle joke at Hollywood’s expense, showing up the studios for not having enough pull in the 1970s to get the statute written the way that they really wanted?