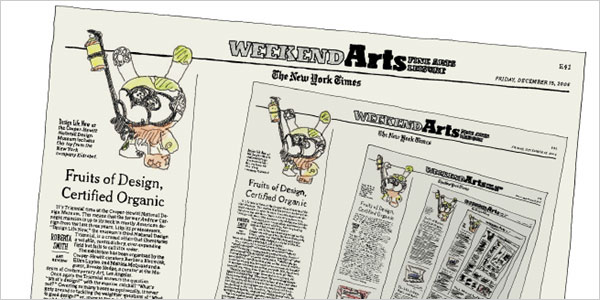 Pierre Menard, in Borges’s telling, created an entirely new version of Don Quixote by copying Cervantes word for word.Â Â Has Serkan Ozkaya, a Turkish artistÂ profiled in today’s NYT, stolen Menard’s idea?Â  Ozkaya “reproduces” everyday things, including the very page of the Times on which the profile appears.

â€œA newspaper is history, one-a-day history,â€ he said. â€œItâ€™s our memory of what happened. So to make a drawing of it, to make a simulation of it, is what art always does: to mimic life, to mimic what is real.â€ Though in his case, of course, itâ€™s a drawing of a copy of a version of what happened, holding a mirror up to nature with a refraction or two in between.

In a way that mixes Borges with a dollop of Jean Baudrillard and a heavy helping of Walter Benjamin, the work also upends ideas about copies being less valuable than originals. Readers of this page might be less likely to wrap their fish in it, perhaps seeing it as an art-world keepsake. And the drawing of the page itself could end

up, someday, in a collection or museum.

Warhol and Duchamp, not Menard,Â did this first and did it better, and they and Benjamin are still doing somersaults in the afterlife.Â  This holiday season, Campbell’s Soup is taking Warhol’s art and making it commerce again.Â  Barney’s is selling soup with Warhol “designer labels.”Â  That’s not thievery; it’s art.Â  And business.Â  At $12 per can, which is about as real as soup gets.