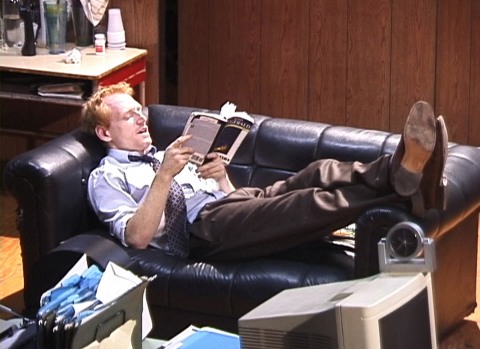 I was moved to mention Derek Bambauer’s very interesting article on Abolishing the Derivative Works Right in Copyright after seeing a couple performances by the theater company Elevator Repair Service. They are noted in legal circles for a ridiculous battle with the Fitzgerald estate over their avant-garde performance of every word of The Great Gatsby in “Gatz.” According to an NYT article,

“Gatz” has been on the international avant-garde circuit . . . . But despite the encouraging notices and adoring producers, New Yorkers will not get to see this production â€” at least not in the near future. Out of courtesy to another [more traditional] version of “The Great Gatsby,” the F. Scott Fitzgerald estate barred Elevator Repair Service from presenting “Gatz” in its hometown. “We are concerned that ‘Gatz’ would be confused with the other ‘Gatsby,'” said Phyllis Westberg, an agent for Harold Ober Associates who represents the Fitzgerald estate.

Yes–theater-goers are really going to confuse a six-hour-plus marathon reading of the novel in an East Village garret with a traditional adaptation on Broadway. One more example of risk-aversion and rights accretion, I guess. But it would be terribly sad to see other estates stop this group’s performances. Their verbatim re-enactment of a Jack Kerouac/William F. Buckley confrontation was hilarious, and I’ll never think of William Faulkner’s The Sound and the Fury the same way after seeing a truly inspired workshop session based on the first, Benjy section.

But this brings me to one copyright question: how would Elevator Repair Service’s work be treated under section 101 (definitions) of the Copyright Act? They say every word of each of these works, so on the one hand they are performing them. On the other hand, the adaptation is so creative and multilayered that it would seem almost unfair not to call them more than performances–i.e., derivative works. I don’t want to try to recognize something like Edward Einhorn’s odd claim that he had a copyright in the “blocking and choreography” of a play he directed. ERS’s performances appear to me a lot more creative and worthy of recognition than that.

PS: Here’s an interview on the topic & photo source.