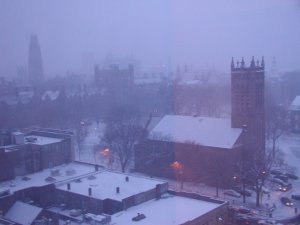 Like several other folks who blog, I went up to Yale’s Reputation Economies conference last weekend. Plenty of others have offered thoughts about the conference (including Frank here). Eric Goldman has his own thoughts and a good list of links to other blogs and Rebecca Tushnet very helpfully posted panel-by-panel summaries.

It was an interesting conference, but before offering brief reactions, I should say that the most interesting thing for me was seeing Yale again. It was the first time I had been back to New Haven in over a decade, which was too long. I went up with my father (who is Y ’63) and we walked around the campus quite a bit. Unfortunately, I missed the two big things I was looking forward to. My old residential college, Jonathan Edwards (sux et veritas) is being renovated and the incomparable Doodle was closed. But I got to see the rest of the campus, and though it was slightly more plush, it was somehow pleasant to see how much was the same, at least in the vicinity of JE and the law school. 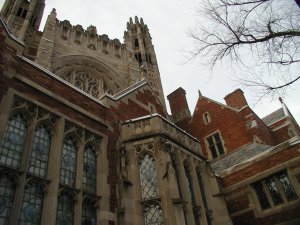 Though I rarely stepped foot in the law school back in the late 80’s, it is, like most of the rest of Yale, a truly gorgeous building. It was so striking that it made me wonder what influence that type of architecture might have on the legal education that takes place there. Personally, I often associate knowledge with places. Some of the plays of Shakespeare are hard to think of apart from some of the buildings where I read them and listed to lectures about them. So I imagine that some of the Yale Law students must associate their initial forays into Holmes and Cardozo with the Gothic grandeur of the building.

Come to think of it, a disproportionate number of Yale law students become professors. I suppose we shouldn’t ascribe that to architecture alone, but the school does seem a bit like a cathedral of learning. Might that not influence the way students perceive the object of study? (A point of comparison suggested by a friend: what would Harry Potter’s education have been divorced from the imagined architecture of Hogwarts?)

More after the fold…

So I came to the Reputation Economies conference wondering how the dynamic of Yale’s fame might be tied up with its physical beauty and how its architecture might situate personal experiences and broader social networks.

Of course, architecture probably plays somewhat a smaller part in Yale’s fame as does its history of extreme exclusivity in admissions and, perhaps, a 22 billion dollar endowment that lets it keep the buildings rather nice. But the physical space is certainly one part of the brand of Yale and informs what the place is and what it means to various people.

The splendor of Yale, however, casts a shadow. Frank has explored how the winning and losing of reputation games can have pernicious side effects in his writing on rankings and Mike has had some really interesting things to say about the prestige economies of law reviews. I’ve been thinking about these issues as well in some of my recent writing, looking at how reputation interests can act as incentives to creativity. I see blogs as very interesting examples of reputation economies — as this person observes, many people seem to blog, at least in part, in pursuit of new relationships and reputation. (Whether that is the ultimate effect of blogging is hardly clear!)

At least on the internet, it seems the term “reputation economy” (see Google) is tied up with blogging, since it stems from the fantasy of Whuffie invented by a blogger, Cory Doctorow. Doctorow co-authors what is usually billed as the #1 or #close-to-1 blog out there, BoingBoing. (Fwiw, Doctorow gave the conference a plug.) The interesting thing to note, though, is that BoingBoing, unlike many blogs, is pretty clearly economic in the classic sense. Its ad sales top $1 million a year, so BoingBoing is an advertising economy, mostly. Like Yale, there’s a lot of reputation capital to be found at BoingBoing, but there’s plenty of hard currency there as well.

The conference, by the way, wasn’t really about any of this. It turned out that although some speakers mentioned blogs a bit, the majority of folks weren’t really talking about this type of “reputation economy.” Instead, the topic du jour seemed to be Facebook’s Beacon kerfuffle. The key questions being discussed concerned the intersection of personal privacy and the business of datamining. That’s a great topic and it certainly has something to do with reputations, economics, and law. But it wasn’t the conference I was expecting. I suppose that I have to agree with Eric Goldman that there really isn’t much consensus on what reputation, much less “reputation economy,” means.

Yet I did enjoy the conference. There were a bunch of smart people offering their current work and new insights. For instance, the presentation of Alessandro Acquisti gave me a perfect story for my seminar next semester on the right of publicity. The story also involves one of the most beautiful buildings in the world, the loss of which was devastating to the society at Ephesus.

This is from the first paragraph of his position paper:

The Greek temple of Artemis at Ephesus (in what is now Turkey) was one of the seven wonders of the ancient world. It was destroyed – not by time, weather, earthquake, or war; it was set on fire and burnt down by a young man in 356 B.C. Captured by the citizens of Ephesus and put to torture, the man claimed that his arson had been motivated by the goal of gaining immortality for himself and his name. So the Ephesians, after executing him, condemned his name to oblivion. But the historian Theopompus recorded his name, and so did the geographer Strabus after him: hence the name of Herostratus became â€œembalmed [in history], like a fly in amber,â€ as Smith wrote.

What a perfect example of the way the pursuit of fame can defy conventional economic logic. Plenty of books on the social phenomenon of fame and celebrity start with similar cautionary stories, but it is always fun to spot relationships between the contemporary internet culture and ancient history. Acquisiti is currently looking into how tools from behavioral economics might help understand the successors of Herostratus, people who intentionally pursue infamy on places like Facebook. It’s fascinating stuff and some of his work is posted here.