A reservist friend alerted me to this story, which puts questions of IP rights for fashion design in a different light:Â

One of the stranger questions to emerge after the August conflict between Russia and Georgia: Did Russians go to war in camouflage filched from Finland? 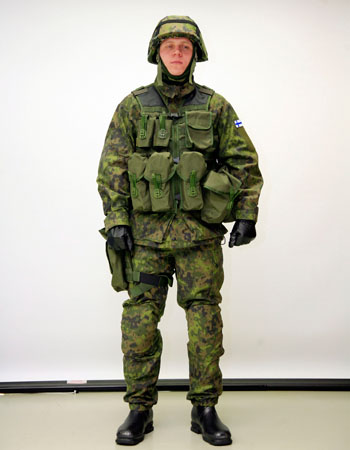 Officials were trying to determine whether the Finnish M/05 camouflage, top, was on Russian uniforms, below.

That, anyway, is the theory circulating among Finnish commentators, who have been examining such fine points of camouflage design as outline irregularity and light-to-medium-green ratios. Using photographs taken in Georgia, Finnish authorities are trying to determine whether Russian armed forces are wearing M/05, a pattern that is based on digital photographs of Finnish forests and that is legally protected in the European Union. . . .

This fall, word reached Petri Korhonen, a reporter for Taloussanomat, a business news Web site, that M/05 look-alikes were popping up in the Georgian conflict zone. After Mr. Korhonen wrote about the matter, the Finnish Defense Forces began an inquiry. But it turned out to be difficult to proceed from there.

The Russians use a profusion of different uniforms, especially in special forces units, and Finnish officials found differences between their uniforms and the Russian ones. â€œThe colors and the shapes are the same, more or less, but the way the dress is cut is different,â€ said Jyrki Iivonen, director for public policy at the Ministry of Defense of Finland.

Since then, Finnish officials have been waiting for the matter to fade away. â€œIn Finland, people always get excited when they are talking about Russia,â€ Mr. Iivonen noted. Finland was absorbed into the Russian empire for most of the 19th century and fought two wars against the Soviet Union during World War II.

Today, the two countries share a quiet 800-mile border. Asked whether Finnish authorities were concerned about distinguishing their troops from Russians on the battlefield, Captain Karhuvaara noted that the uniforms under scrutiny belong to troops in the Russian Ministry of the Interior, which oversees police forces inside Russia. â€œIf Russian Ministry of the Interior troops would invade Finland,â€ he said, â€œwe would have big trouble.â€

So the Finns, like many fashion designers, have decided to let the matter drop.