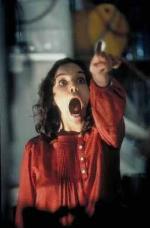 Following on the theme of thoughts that occurred to me as I was teaching Copyright Law this past semester, here’s another. Preparing for the class sessions on substantial similarity, the whole doctrine suddenly struck me as just odd. I don’t mean that it’s vague or inscrutable; anyone who has spent more than 5 minutes with it realizes that. Rather, the doctrine, which I’ve learned and lived with for years, suddenly appeared to me to be like one of those science fiction movies or Twilight Zone episodes where a person suddenly concludes that their spouse or friends are actually imposters, despite all appearances to the contrary.

I’ll do my best to explain what struck me as weird, but I don’t have it quite figured out yet. It started when I was re-reading Nichols v. Universal Pictures Corp., the famous “Abie’s Irish Rose” case. Why is this case even in our casebooks? Why is it so famous? The case does not actually do anything besides make the seemingly obvious point that it is not infringement to write a play in the same general genre as an earlier play. The “levels of abstraction test,” the most famous bit, as is well known, is a nice image, but does not help in actually drawing the line between unprotectable idea and infringing expression.

I’m assuming that Nichols seemed significant at the time, or perhaps a decade or two later. My first guess was that Nichols and perhaps other contemporaneous cases like it were responding to some sort of shift in copyright doctrine. You would need a holding like Nichols if all of a sudden it had become thinkable that very high-level similarities between two plays might give rise to a successful claim of infringement. Except that there are several cases and treatises making essentially the same point as Nichols decades before. For example, consider Eichel v. Marcin, 241 F. 404 (S.D.N.Y. 1913), decided by Judge Manton, later elevated to the Second Circuit. Eichel concerned two plays, “Wedding Presents” and “Cheating Cheaters.” Judge Manton, in language similar to the Nichols opinion, held the defendant’s play non-infringing:

If an author, by originating a new arrangement and form of expression of certain ideas or conceptions, could withdraw these ideas or conceptions from the stock of materials to be used by other authors, each copyright would narrow the field of thought open for development and exploitation, and science, poetry, narrative, and dramatic fiction and other branches of literature would be hindered by copyright, instead of being promoted. A poem consists of words, expressing conceptions of words or lines of thoughts; but copyright in the poem gives no monopoly in the separate words, or in the ideas, conception, or facts expressed or described by the words. A copyright extends only to the arrangement of the words. A copyright does not give a monopoly in any incident in a play. Other authors have a right to exploit the facts, experiences, field of thought, and general ideas, provided they do not substantially copy a concrete form, in which the circumstances and ideas have been developed, arranged, and put into shape.

The plaintiffs in Eichel, just like the plaintiff in Nichols, prepared an elaborate chart of similar elements in the two plays. No dice, said Judge Manton, pointing out that each of the alleged similarities had been the subject of numerous other plays as well (Manton then listed examples; apparently he was quite the theater buff). He concluded:

The resemblances between the two dramatic compositions, I am of the opinion, are minor instances and are not important. The copyright cannot protect the fundamental plot, which is common property, as was pointed out above, long before the story was written. It will, of course, protect the author, who adds elements of literary value to the old plot; but it will not prohibit the presentation by some one else of the same old plot without the particular embellishments.

So if Nichols was not some breakthrough resolution of a novel difficulty, why is it so famous now? My other guess is that the significance of Nichols relates more to what came after than what came before, and here Nichols ties in with the rest of the substantial similarity materials. Substantial similarity, at least the way it plays out now, gives some initial weeding tasks to the judge to determine if the defendant actually copied from the plaintiff or not — but then, if there are copied elements, kicks the whole issue to the jury, with very little in the way of instruction — to weigh the “total concept and feel,” which is only a delusional improvement on “substantially similar” itself. This is the other bizarre aspect of substantial similarity, to my mind; what is the doctrine supposed to be doing, exactly? Was it ever supposed to be a higher threshold beyond actual copying, and what is the threshold?

I think it may be significant that Nichols was decided in 1930, before the merger of law and equity. The Nichols district court case, 34 F.2d 145 (S.D.N.Y. 1929), was a case brought in equity, as most were; the district court judge begins, “This is a suit for the alleged infringement of a copyright, and the usual injunctive relief with an accounting is prayed for.” The Nichols appeal, therefore, is staking out the outer edge of a range of cases in which judges might have to determine whether the similarities between two works are “substantial” or not. But after the merger of law and equity, this issue goes to the jury, and in a particularly standardless way (why there’s no guidance given to the jury is something I don’t understand). The “levels of abstraction” test therefore becomes not the end of a scale that judges will be applying in total, but rather a judge’s last crack and resolving a case on actual copying of protected expression before the case goes into the black box of the jury room.

Something still seems particularly warped there, but I can’t quite put my finger on it. Just like Brooke Adams in Invasion of the Body Snatchers.