I just returned from a couple of weeks visiting family back east, where â€œvisiting familyâ€Â is construed as â€œdriving a couple of hours each day to different locations (locations that all seemed so close to each other when you were back in Texas), where you spend inadequate amounts of time with inadequate numbers of people, and come home feeling like you need a vacation.â€Â  But I digress.Â  The story I want to blog about is one that was told to me over the picnic table on the Fourth of Julyâ€¦

My cousin is a manager for the musician Amy Grant.Â  This spring, Amy played a concert in Pittsburgh and members of my family attended.Â  Before the show, my cousin wasÂ at the urinalÂ in the bathroom, and was interrupted by none other thanâ€¦ [wait for it]â€¦ Gene Simmons! Â Which doesnâ€™t happen everyday, at least from my limited knowledge of menâ€™s public restrooms.Â  Now, one might think that Gene Simmons would be very unlikely to show up at an Amy Grant concert, but they did some work together years ago, so it wasnâ€™t completely out of left field.Â

Gene Simmons wanted to go backstage to see Amy after the show, so my cousin went and did some checking to make sure it was on the up and up.Â  He checked the box office to see if tickets were held in Geneâ€™s name and purchased with a credit card with his name on it; asked Gene for specifics and then checked with Amy to see if Geneâ€™s recollections of her were true; and talked to the paparazzi who had interviewed him.Â  While Mr. Simmons mingled in the hall, the place was abuzz.Â  News spread quickly.Â  Amy agreed to meet with Gene, and my cousin escorted him backstage after the show.Â

Amy greeted him warmly, and they chatted for a moment.Â  Then, he whispered something in her ear and handed her a business card.Â  It turns out it was not Gene Simmons at all, but a Gene Simmons impersonator working in the Pittsburgh area, who happens to be a fan of Amy Grant.Â  (Mike Madison, have you been moonlighting?)Â  Amy was incredibly gracious and warm, and did not kick him in the shins, even once.Â  My family proceeded to have their picture taken with Gene Simmons, errrâ€¦ Peter.Â  (Amy Grant took the picture, which means I probably should have asked her for permission before posting it here.Â  Rudeness and IP violations abound!)Â  Apparently the guy goes all over Pittsburgh doing this sort of thing, judging by the large number of videos that he has posted, including one of the night in question, and the number of random internet postings that say things like â€œHOLY #&*%! GENE SIMMONS WAS AT THE PGH HOME AND GARDEN SHOW!” Â

Â Whether or not there is an advertising or commercial purpose to his efforts here cognizable under the PA right of publicity statute may be questionable, because I donâ€™t know the extent of his commercial activity â€œon or in connection with the offering for sale or sale of â€¦goods, servicesâ€¦â€ beyond backstage passes and publicity itself, which is of course its own form of commerce.Â  In any event, it made for a good story at a family picnicâ€¦ and a great photo for the family album: 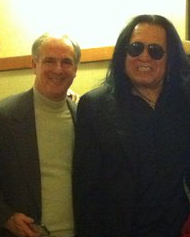