Four years ago, during the 2006 World Cup, a Dutch beer company (Bavaria) earned its place in trademark lore and scholarship by engaging in a particularly amusing form of what has come to be known as “ambush” marketing.  It put together a marketing campaign that led to Dutch fans wearing orange Bavaria “leeuwenhose” to matches featuring the Dutch team.  Stadium officials, acting in response to FIFA instructions aimed at protecting the exclusivity of Budweiser’s World Cup sponsorship, made the fans remove their pants.  Mark McKenna and Mark Lemley used the episode to frame a paper about the overbreadth of contemporary trademark law. 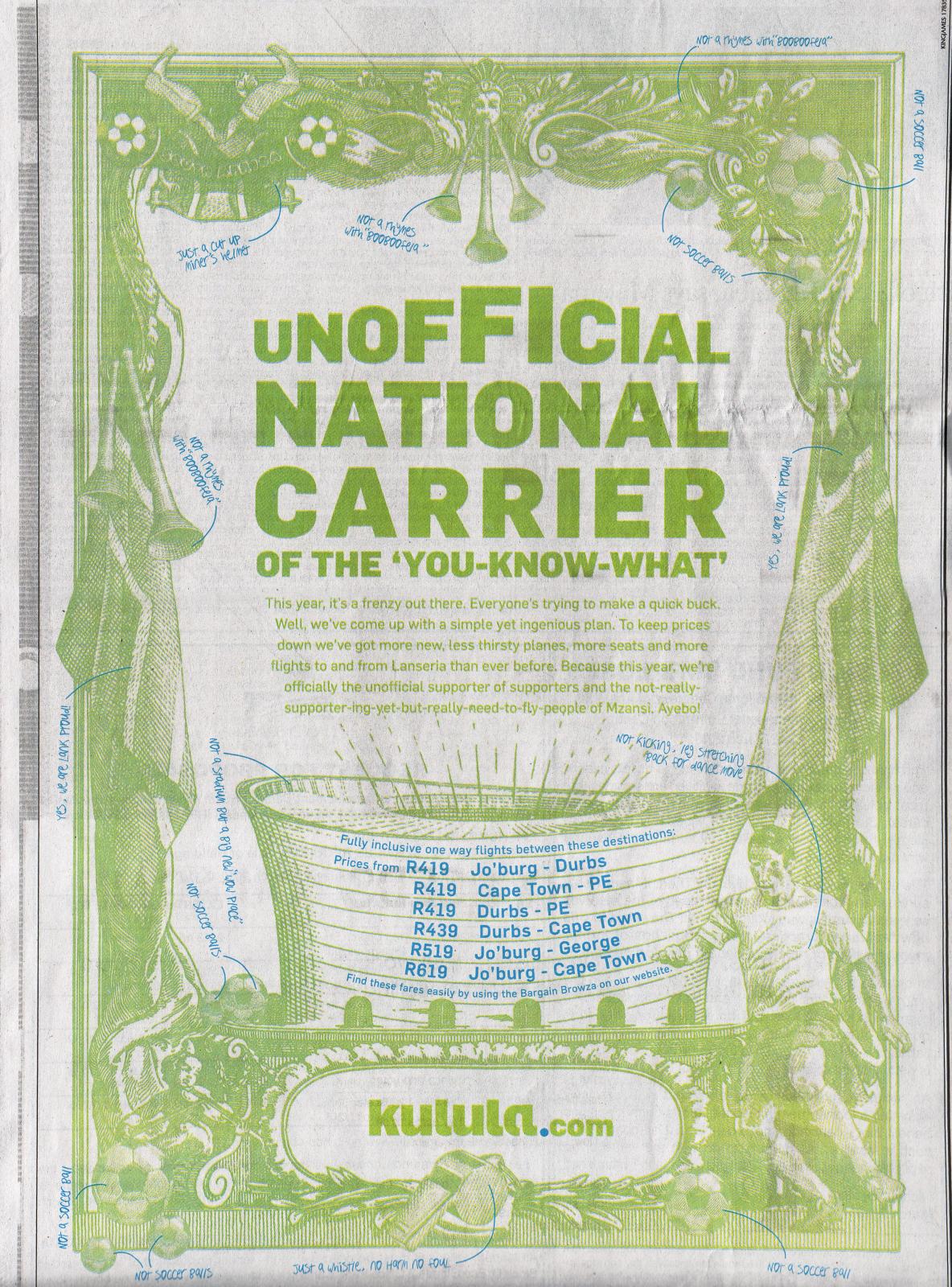 Will the equivalent 2010 example consist of FIFA’s demand last March that a South African airlilne, Kulula, cease distributing an advertisement that featured the tag line, “Unofficial National Carrier of the You-Know-What”?  The advertisement, pictured here, also includes images of the South Africa flag, footballs, vuvuzelas (the unofficial instrument of South African football fans), and the Johannesburg football stadium, where the final will be played.

According to the BBC, FIFA released a relevant statement:

“For the record, Fifa did not tell Kulula that they could not use soccer balls, or the word ‘South Africa’, or the Cape Town stadium, or the national flag or vuvuzelas,” said a statement from football’s world governing body.

It was the combination of these elements which were banned, the statement said.

Fifa said the advert breached South African law “by seeking to gain a promotional benefit for the kulula brand by creating an unauthorised association with the 2010 Fifa World Cup”.

The odd and therefore overbroad thing about FIFA’s statement (“unauthorised association with the 2010 Fifa World Cup”) is that the Kulula ad does precisely the opposite:  It clearly (and cheekily) claims that the airline has *no* authorized association with the World Cup — assuming, as trademark ought to, that the term “association” has to do with some formal (likely contractual) relationship between Kulula and FIFA.  It is possible, I suppose, that consumers in South Africa (and others traveling to South Africa for the finals) would read the ad and conclude that “unofficial” means “official,” on the premise that no one should have the right to combine football imagery as the ad did, around the time of the tournament, except an “official” sponsor.

For its part, FIFA appears to claim something quite broader, that something being the kind of overbroad use of the term “association” that McKenna and Lemley are contesting:  In the minds of consumers, an “association” is formed between “Kulula” and “World Cup.”  FIFA claims the right to control whether, when, and how that association is formed.  It is a bit of a stretch, but not an extraordinary one, to conclude that FIFA claims that only FIFA, and its authorized partners, are permitted to prompt a mental “association” between World Cup football and any product or service — even if that “association” unambiguously distinguishes the supply or sponsorship of that product or service from FIFA.  One wonders about the fate of the many books to come that will chronicle the 2010 finals, competing with “authorized” FIFA histories.

One might complain about free-riding and unfair competition by Kulula, but traditional trademark doctrine ties those ideas to the proposition that there is some confusion in the marketplace based on the defendant’s use of the plaintiff’s mark.  Is there any confusion here?  I see none.  Not only has Kulula not used any marks owned by FIFA, but it has done nothing more than refer to an event that no one — not even FIFA — “owns.”

For more on the problematic character of FIFA’s claim, re-read Stacey Dogan’s excellent article from 2003, “An Exclusive Right to Evoke.“

One thought on “Ambush Marketing and the 2010 World Cup”