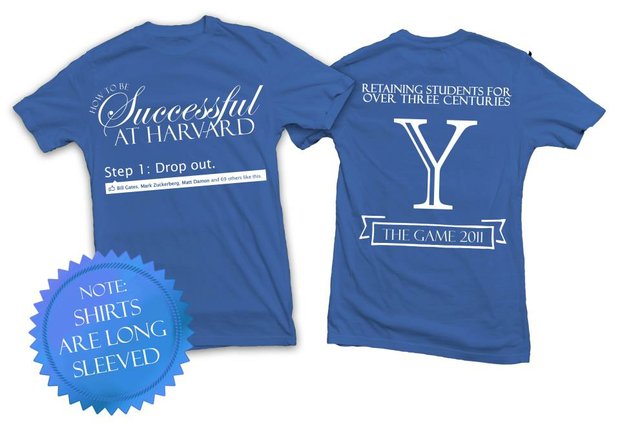 On the eve of this year’s renewal of a college football rivalry that is meaningless to everyone except those who play and some who watch, Harvard has already one-upped Yale.

Yale’s Freshman College Council (FCC) designed a t-shirt to sell to students.  As per tradition, the shirt mocks the other school.  This year’s version, in its original edition (pictured, left), read “How to be successful at Harvard / Step 1: Drop Out,”  and then noted, Facebook-style, that “Bill Gates, Mark Zuckerberg, Matt Damon” and others “liked” this.

Yale asked the students to consult relevant officials at Harvard.  Harvard, recognizing a slow-pitch softball when it sees one, asked that the Yale students remove the names of its celebrity non-graduates.

Which the students have done.